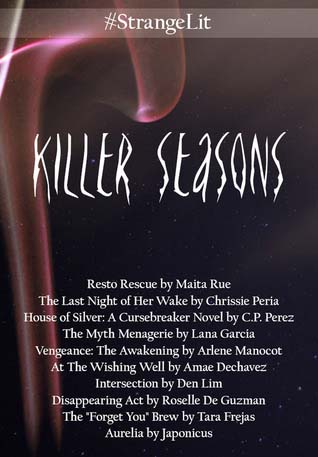 A werewolf chef, a cursed family, a spell to forget. You'll meet these and more in the ten stories of the KILLER SEASONS installment of #StrangeLit.

The Last Night of Her Wake by Chrissie Peria

There is a wake in Sitio Lumawig.  A young woman, barely seventeen, left her hometown, only to return home in a wooden box. Brutally murdered, there are no witnesses. Nobody knows what happened. When it happened. Or who did it. All they know is that there was pain—so much pain in her passing.

As her father keeps vigil over her battered body, a single question keeps him company. Who is to blame for his daughter’s death?

There was something interesting and mysterious just by the title and cover of Chrissie Peria’s short story, The Last Night of Her Wake. I’ve been a fan of Peria’s romance work and for her to write something outside that familiar space is an exciting thing as a reader. Reading The Last Night of Her Wake further solidified my belief that Peria can do no wrong and her writing chops is the stuff of magic.